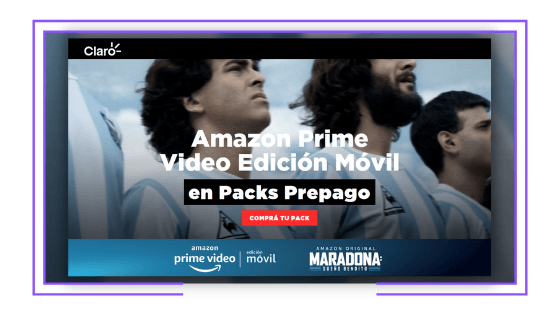 The mobile edition of streaming platform Amazon Prime Video took its second step in Latin America. After making its debut with Tigo (Millicom) in Guatemala in 2020, it was launched for Claro (América Móvil) mobile phone service pre-paid customers in Argentina on October 29, 2021. This edition makes it possible to access the OTT’s whole catalog only on mobile phones in standard quality, on one screen at a time.

The proposal was presented as a promotion, which will be valid until November 30. Pre-paid users who sign up to 2 GB or higher mobile Internet packs, either for a 7 or 30 day period, will be given free subscription to Amazon Prime Video mobile edition for 90 days, provided the user has an active pack.

“We are working on this new offering, which has required a huge technological effort, in order that our pre-paid customers may access the best Amazon Prime Video content. In this way, we are offering an innovative improved experience that places us in an unparalleled position in the market,” remarked Julio Porras, Claro Argentina, Uruguay and Paraguay CEO. The telecommunications company was previously a partner of Amazon Prime Video and offered the OTT’s classic version to all its customers with a benefit of three free months.

The plan was launched simultaneously with the release of a new Amazon original series on the life of late Argentine soccer player Diego Armando Maradona, entitled Maradona: Sueño Bendito.