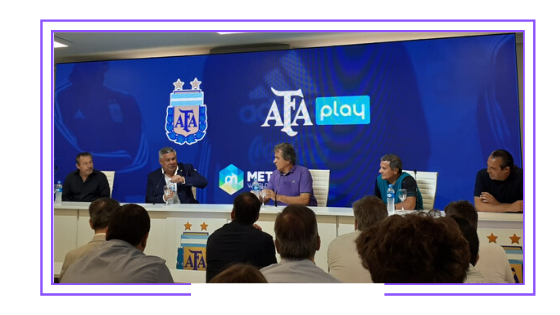 The Argentine Soccer Association (AFA) has officially launched its new OTT platform, which goes by the name of AFA Play. “In addition to VOD content, we will have live content,” AFA Commercial and Marketing Manager Leandro Petersen told TAVI Latam during the launch event, held at AFA training center located in Ezeiza, Buenos Aires Province.

“Live content will include press releases, Argentine national team’s training sessions, women’s soccer matches and we will add more,” explained Petersen. VOD content will include interviews with members and former members of the Argentine national team (interview with Diego Maradona is worth highlighting), profiles of current members of the national team (Lionel Messi’s profile is noteworthy), as well as intimate details of pre-match meetings and training sessions. The value of AFA’s archives will be vindicated by showing complete World Cup matches.

The monthly cost of the service in Argentina is ARS 150 (approximately USD 2.50), whereas in other countries (it is available worldwide) the price is USD 3.00. The user is given the option of choosing a yearly plan and saving up an amount equivalent to two months’ subscription cost. The platform offers a free one-month trial period.

“We have set a reasonable price to make it accessible to everybody. We conducted marketing research taking into account platforms throughout the world,” AFA Commercial and Marketing Manager explained to TAVI Latam.

The service is already available on all devices. It may be accessed through www.afaplay.com and downloading the app in Play Store and App Store. It is possible to use up to two devices at the same time.

“This is an AFA project. We have been working on it for more than one year. We have hired several companies for the production of content but we have our own platform,” Petersen told TAVI Latam. “The product employs cutting-edge technology and is comparable to the platforms of the best European clubs and federations,” he added.