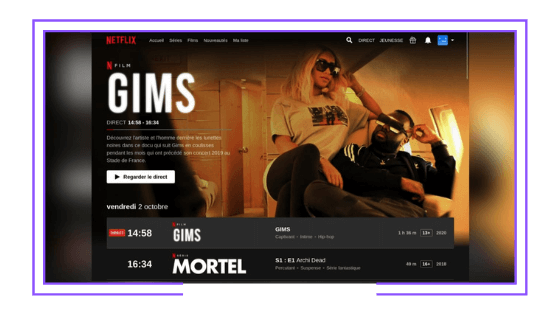 Netflix, the streaming service managed by Reed Hastings, keeps searching for new options to improve the user’s experience. It has just launched its first linear channel, whose name is Direct. For the time being, it is available only in France.

This new initiative is Netflix’s first experience in the linear TV scene.

“We’re testing a new viewing option in France, where traditional TV remains highly popular and many viewers enjoy a lean back experience that allows them to avoid having to choose shows,” explained company executives through a press release. “If you are not inspired to decide, or you’re new and just finding your way around, you may let Netflix decide for you and surprise you with its varied catalog,” they added.

In its effort to find options to relieve the customer of the need to choose, the OTT had previously performed some tests in several countries. On one occasion, it introduced a shuffle button. On another, it added an option that allowed the user to start reproducing a randomly selected episode of some popular series. Moreover, a button called “play something” was inserted on the navigation bar in order that Netflix algorithm should select the content.

The new linear channel is accessible only via web browser and airs French, European and international content included in the catalog in real time. “As from November 5, Direct will be gradually implemented in France and it will be available to all our French customers in early December,” according to information provided by the company.