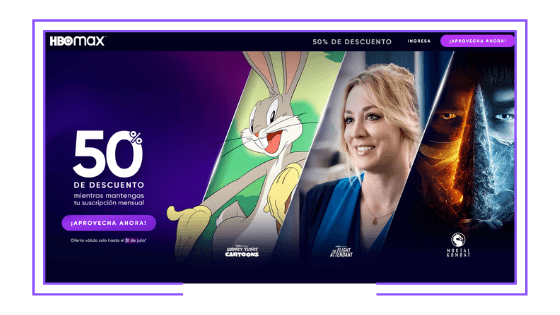 HBO Max, the new streaming platform, arrived in Latin America on June 29 with a innovative launch promotion. All those users who sign up before July 31, 2021 will be granted a 50% unlimited time discount, for as long as they maintain their subscription. The new OTT, owned by WarnerMedia (about to become Warner Bros. Discovery), offers a catalog that includes movies, series, documentaries, reality shows and child-focused content from important brands such as HBO, Warner Bros., Cartoon Network, DC and Looney tunes, as well as exclusive originals.

“We launch HBO Max in our region with an unprecedented offer rewarding our first wave of subscribers, making our vast collection of movies and TV series incredibly affordable,” asserted Luis Durán, General Manager of HBO Max for Latin America.

The platform includes two plans. The Standard Plan offers HD and 4K content on all compatible devices, as well as access to three users simultaneously. The Mobile Plan offers just SD content, may be enjoyed only on mobile devices and allows access to one user at a time. The service also makes a catalog available to the general public free of charge. HBO Max is accessible for subscription at www.hbomax.com or through the OTT’s app from smartphones, tablets, streaming devices or smart TVs. Prices vary from territory to territory.

It is important to mention that HBO Max has several distribution partners, such as AT&T, DirecTV, Sky Brasil, Claro, Telcel, Telmex, Oi and Mercado Libre, which will offer discounts and benefits to their customers when they sign up.

It is worth highlighting that in Latin America current users of HBO Pay TV Premium pack are granted access to HBO Max without additional charge (operators that have entered into an agreement with WarnerMedia). With regard to HBO Go SVOD users, they automatically become HBO Max users at the same price, given that HBO Go was discontinued on the launch of the new OTT.