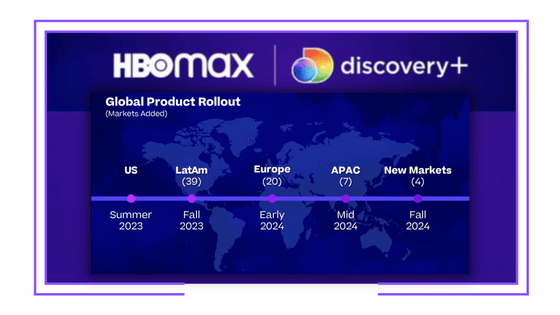 During the earnings call held on August 4, Warner Bros. Discovery (WBD) announced that the new streaming service fusing HBO Max and Discovery+, the company’s OTT products, will launch in Latin America in the last quarter of 2023. The platform is to roll out in the US market in mid-2023.

“At the end of the day, putting all the content together was the only way we saw to make this a viable business,” remarked Jean-Briac Perrette, CEO and president of global streaming for Warner Bros. Discovery. The company preferred not to disclose details about the number of subscribers of each platform. The only information it revealed was that HBO Max, HBO Pay TV premium channels and Discovery+ subscribers combined totaled 92.1 million globally as at the end of the second quarter 2022. In Latin America, HBO Max has been operating since June 2021 in most countries, whereas Discovery+ has been available in Brazil since November 2021 and is also available in Puerto Rico, where its launch was simultaneous with the rollout in the United States.

According to WBD, the brand name for the new streaming service has not been determined yet. Initially, the company is focusing on two paid packages: with ads and without ads. Later on, it will work on a free ad-supported plan and a TVOD (Transactional Video on Demand) model.

The new OTT will offer a catalog combining HBO Max and Discovery+ content and will avail itself of the most important technological resources of each platform. Its motto is “customer experience & quality first”.