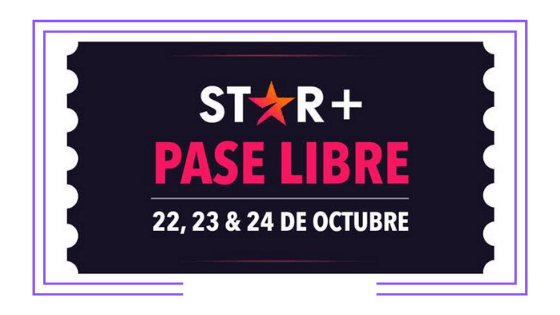 As part of its promotion strategy, sports and entertainment streaming platform Star+ (Disney) has launched a proposal called Pase Libre (Free Pass), which consists in offering free access during three days next weekend (October 22, 23 and 24). The offer will be available in Mexico, Brazil, Chile, Colombia and Peru.

This is very similar to free periods offered by several OTTs in Latin America, never offered by Star+ so far. In order to enjoy the benefit, it is necessary to sign up to Star+ service, the billing of which will begin once the free three-day period has elapsed. Users may opt to cancel their subscription before the first payment.

Pase Libre allows visualization of the whole content of the platform, ranging from movies, series, animated series and documentaries to Espn live sports. Next weekend highlights include The Empty Man movie premiere and the last chapter of the tenth season of American Horror Story; important soccer matches such as Olympique de Marsella vs. PSG in France’s Ligue 1, Inter vs. Juventus and Roma vs. Napoli in Italy’s Serie A, Manchester United vs. Liverpool in England’s Premier League and Barcelona vs. Real Madrid in Spain’s LaLiga; U.S. leagues such as the NFL, the MLB, the NBA and the NHL and Formula 1 U.S. Grand Prix.