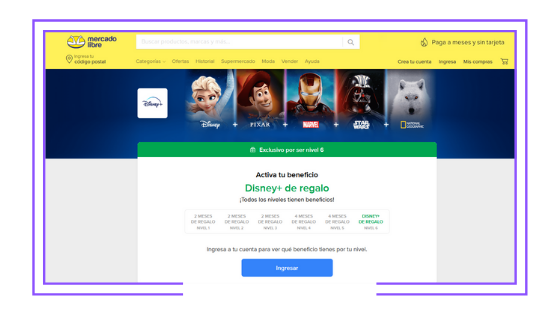 In Mexico, e-commerce platform Mercado Libre is granting a new benefit to users who have reached Level 6, the highest in the company’s customer loyalty program. Now Level 6 customers are given subscription to streaming service Disney+ (The Walt Disney Company) as a gift. The promotion is not available in other markets for the time being.

The new proposal reinforces the partnership between Mercado Libre and Disney+, existing since the launch of the OTT in Latin America in November 2020. Users were and are still given free service for periods ranging from two to six months, according to their level.

The 100% discount is given automatically each month to all those Level 6 users who signed up to Disney+ previously and to those who sign up from now on. The benefit remains effective as long as the customer keeps the same level. Any user who goes down to Level 5 even for a single month will have to pay the fee for that month.

Other streaming platforms that have partnered with Mercado Libre in some Latin American countries are HBO Max (WarnerMedia) and Paramount+ (ViacomCBS). In both cases, the benefit consists in seven free days and discounts in the subscription fee (between 10% and 50%, according to customer level).