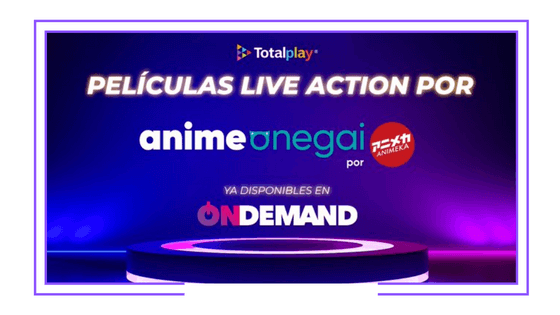 Through an innovative partnership, Mexican telecommunications operator Totalplay, owned by Grupo Salinas, and streaming platform Anime Onegai por Animeka, specialized in Japanese content, are now offering live action movies. The titles are available only to Totalplay Pay TV users through transactional video on demand (TVOD) model, on the On Demand section. The price to rent each movie for two days is MXN 55 (roughly equivalent to USD 2.75).

The titles launched so far are Horimiya, Saint Young Men, Saint Young Men 2, Chef Watanabe: Se Busca, Querido Huésped, Estrella Rebelde, Instinto and Diario Gourmet Para Conquistar. All the movies have subtitles in Spanish and Horimiya has also been dubbed (using the same Spanish voices as those used for the adaptation of the original manga to the anime version). “We hope these movies will soon be available to the rest of Latin America,” said the OTT’s spokespeople. It is important to highlight that the above mentioned content is not included in Anime Onegai por Animeka’s current catalog.

“Thanks to this type of strategic alliance, Anime Onegai por Animeka affirms its commitment to market expansion by removing intermediaries and prioritizing not only users’ but also operators’ needs. This is one of the initial steps leading to a more heterogeneous growth of the market, thus avoiding the risk of potential consolidations,” Anime Onegai por Animeka Latin America Manager Enrique Damián Castañón Martínez told TAVI Latam.

“Totalplay is an ally of vital importance in this effort, an ally that is aware of the soaring demand for Japanese content. At the same time, we are delighted to see that this vision is shared by more and more operators in other Latin American countries. We will be soon sharing new alliances,” noted the executive.