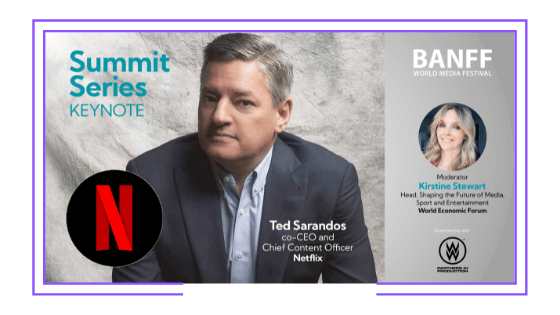 At Canadian Banff World Media Festival (June 14 thru July 16), Netflix Co-CEO Ted Sarandos said that the company was “open to acquiring” audiovisual content production companies. This shows that the streaming platform is likely to join the mergers and acquisitions (M&A) tendency the audiovisual industry has embraced in the last few years, examples of which are Disney-Fox, WarnerMedia-Discovery and Amazon-MGM.

Inquired about potential acquisitions by specialized website Broadcast, Sarandos answered, “historically we’ve been builders instead of buyers – we’ve built out this incredible media library from scratch over the last several years – but we’re certainly open to buying.” “If the asset is at the strategic core, media investments can be very successful,” he added.

Furthermore, Netflix Co-CEO noted that they would watch and see the development of the acquisition of MGM by Amazon, whose Prime Video service competes with Netflix. In Sarandos’ view, the move will benefit Amazon.

Traditionally Netflix has been disinclined to acquire other media companies, although it bought comic book company Millarworld in 2017.