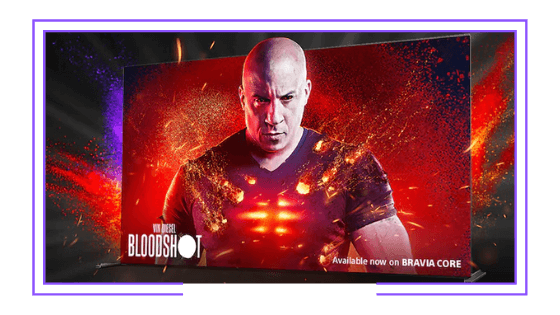 On April 6 Sony launched Bravia Core streaming platform, which is included with Bravia XR smart TV sets. The new OTT offers some of the latest film releases, blockbusters and classics from Sony Pictures Entertainment (SPE). For the time being, the service is available in the United States, Canada, Japan and most European countries, but it has not reached Latin America so far. The multinational technology company announced the launch last January.

Bravia Core is free and can be accessed only on a Bravia XR smart TV. Purchasers of Sony’s brand new line TV sets are granted credits, which may be exchanged for movies from a selection of over 300 great SPE titles, such as Venom, Peter Rabbit , Ghostbusters, Blade Runner 2049, Jumanji: The Next Level, Spider-Man: Far from Home, Little Women, A Beautiful Day in The Neighborhood, Bad Boys For Life, Baby Driver, Hotel Transylvania, Bloodshot and Smurfs: The Lost Village. The number of credits is limited and it is not possible to buy or request additional ones. Bravia Core also offers a VOD catalog of other SPE movies, which can be streamed as many times as desired. Sony is also bundling Studio Access, a feature offering behind-the-scenes footage and interviews, as part of Bravia Core.

The new Bravia XR TVs will deliver content via Pure Stream technology, “achieving near lossless UHD BD equivalent quality with streaming up to 80 Mbps,” Sony explained. “The Bravia XR line-up is based on the new Cognitive Processor XR, which employs a completely new processing method going beyond conventional AI, designed to replicate the ways humans see and hear.”