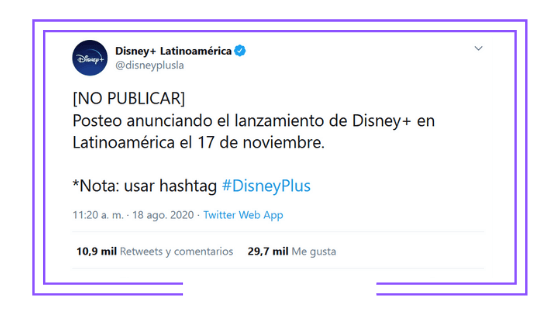 The Walt Disney Company has been gradually disclosing details about the launch of its new streaming platform Disney+ in Latin America. First, it announced that the OTT would reach the region late in 2020, then it specified that the launch would take place in November, last week it confirmed that the service would have exclusive rights to stream Disney, Pixar, Marvel, Star Wars and National Geographic content. Finally, it has just revealed that the launch date will be November 17.

The company disclosed the launch date in a somewhat peculiar way. Disney+ Latinoamérica official account (@disneyplusla) published a tweet reading: “[NOT TO BE PUBLISHED] Post announcing Disney+ launch in Latin America on November 17”. It added “use hashtag #DisneyPlus”.

It was not clear whether the tweet was posted by mistake or it was a strategic move. After the tweet, Disney did not delete the post and confirmed the date. Then the company posted a photo with the following text: “We are watching what’s going on after pressing the wrong button.”