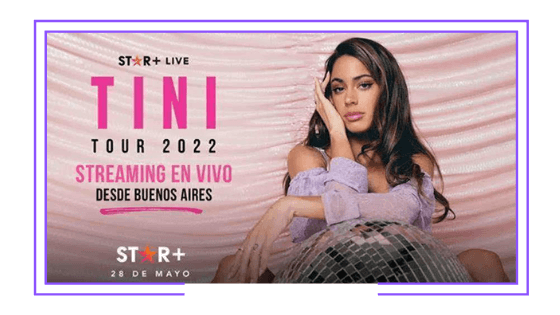 On May 28 Star+, The Walt Disney Company’s streaming service, will be launching a new section called Star+ Live Music. The debut will be a concert by Argentine singer Tini Stoessel.

Tini concert will be the first performance to be offered within the new segment; it is expected that Disney will go on producing content of this kind. According to the company’s spokespeople, “Star+ Live Music invites all subscribers to enjoy the most important cultural events live and to access various types of entertainment such as concerts, festivals, programs and shows from anywhere.” Another streaming platform, HBO Max, offers a similar service, which launched in November 2021.

The recital that will mark the debut of Star+ Live Music will be performed at Palermo Racecourse in the City of Buenos Aires. The show is included in the Tini Tour 2022, tour scheduled to be made by the Argentine pop star this year.

The debut will also include a pre-show programming featuring Laura Fernández, Guille Gilabert, Agustina Casanova and Lizardo Ponce, to be broadcast simultaneously by Star+ and Pay TV channel Star Channel. Argentine company Pegsa will be in charge of production.