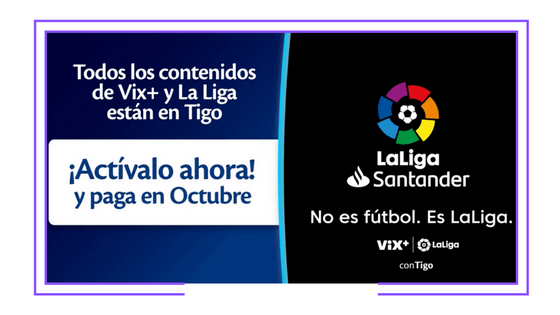 An original agreement between Vix+, the new paid streaming platform owned by TelevisaUnivision, and Tigo, a telecommunications operator owned by Millicom, has been announced. From now on, it will be possible for Tigo users in Costa Rica, Guatemala, El Salvador, Nicaragua, Honduras and Panama to sign up to Vix+ as a premium pack, which will allow them to access not only the SVOD’s already known entertainment catalog, but also all LaLiga (Spain’s soccer tournament) matches live, available through a new channel added to the lineup of Tigo Pay TV service (called Vix+ La Liga con Tigo), and shortly also available on Vix+ platform.

The agreement is a milestone in several respects. To begin with, it implies a significant expansion of Vix+’s partnership strategy, since it is the first time it has partnered with a Central American company. Vix+ had previously entered into agreements with Mexico’s Izzi (Televisa) and Amazon Prime Video. In addition, it offers an original combination: a premium pack offering content on an OTT together with sports content on a Pay TV channel. Finally, it represents Vix+’s debut in Central America as far as live sports are concerned, given that so far it had been offering this type of content only in Mexico and the United States.

The price of Vix+ for Tigo users is higher than the amount paid for conventional Vix+ subscription, which is reasonable taking into account the extra content related to LaLiga. The SVOD costs roughly USD 4.99 in Central American countries, whereas the new pack costs USD 5.99. As a launch promotion, the new package has been made available without any additional charge for a few weeks (the promotion expiration date varies from country to country).

Televisa has held LaLiga broadcasting rights in Central America for several years. Until last season, it aired all matches live on Sky Sports, an exclusive sports network run by Satellite TV operator Sky (owned by Televisa and AT&T), as well as two live matches on sports channel TUDN (TelevisaUnivision). Live broadcasting of all matches on Sky Sports will go on during the current season but TUDN broadcasts will cease.