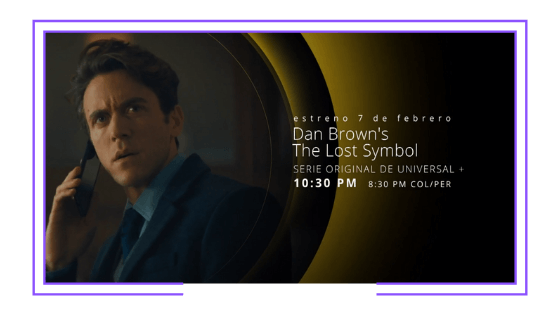 NBCUniversal has begun to show one of the main attractions Universal+, its recently launched premium pack, will offer in Latin America. For the first time, an original produced by its U.S. streaming service Peacock will be available to Universal+ subscribers.

Universal Premiere, one of the five channels included in the premium pack, will begin to air a series entitled Dan Brown’s The Lost Symbol on February 7. Based on the novel The Lost Symbol by Dan Brown, the series consists of ten episodes and describes the early adventures of young Robert Langdon, a professor of iconology and symbology who also stars in successful titles such as The Da Vinci Code, Inferno and Angels & Demons.

The program, produced by Universal Television, Imagine Television Studios and CBS Studios, is a Peacock original that has been internationally distributed by ViacomCBS but never aired in Latin America so far. Given that NBCUniversal lacks its own DTC streaming platform in the region, the new premium bundle offered by the company appears to be the best option to make many Peacock originals available to viewers. The sitcom Rutherford Falls will follow the same path.