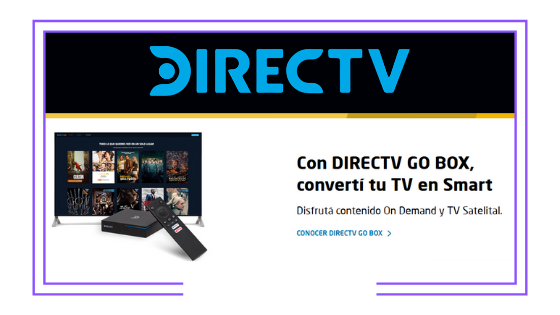 DirecTV has already begun to introduce its streaming set top box DirecTV Go Box into new markets, a decision announced to TAVI Latam by the company’s OTT Vice President Gustavo Fonseca some time ago. After having introduced it in Chile in late 2020, the satellite TV giant launched it in Argentina in the first days of January 2022.

It is worth highlighting that the strategy adopted by DirecTV in the Argentine market differs from the ploy used in Chile. Chilean users may buy the device on a stand alone basis, whereas in Argentina the STB is included in the monthly fee paid by those who sign up to DirecTV new Satellite TV package, called Smart, and lent to the user at no additional cost.

Available at USD 33.9 per month, the Smart Pack offers subscribers a traditional DTH set top box in addition to the Go Box. The package includes 152 channels, 82 of which are HD quality.

DirecTV Go Box is an STB with Android TV that allows access to all streaming platforms, including DirecTV Go, as well as to other applications on a non-connected TV set. The brand-new device has not been launched so far in other Latin American markets in which DirecTV is currently operating.